Because of Padre Jose 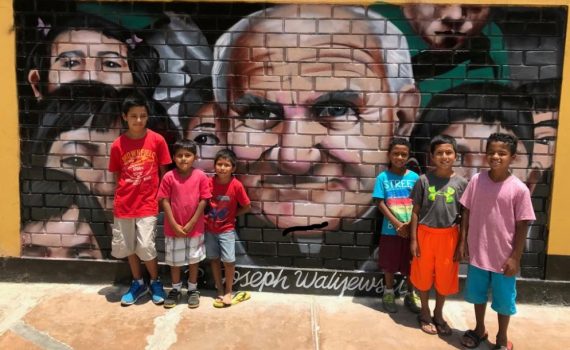 Because of Padre Jose

Father Joseph Walijewski’s heroic and priestly zeal impacted all he encountered. As a missionary within the Diocese of La Crosse, Bolivia and Peru, he established parish churches, soup kitchens and the Casa Hogar Juan Pablo II Orphanage. Today, his spirit lives on in the children who call Casa Hogar home, inspires missionary acts near and far and calls us all into action as lay faithful mission trip volunteers, benefactors, and prayerful warriors.

As Padre Jose’s cause continues to be investigated by the Congregation for the Causes of Saints in Rome, members of the Church find inspiration in his work and prayer. Here, in our own diocese, 12 priests are enrolled in the inaugural Pastoral Leadership Development Program. This program, a partnership with Viterbo University, aims to prepare our priests to become more effective leaders and administrators, calling on Father Joe’s entrepreneurial spirit to better serve the people of God. Across the diocese and around the world, we are called to be missionaries of Father Joseph Walijewski:

Theresa has worked at Casa Hogar for almost 30 years as a family teacher assistant, serving the children and families in Peru. She counts each day and person she meets as a blessing and loves to share her history of Father Joe with all visitors to Casa Hogar.

“Father Joe had so much energy, life and passion for his work that it was hard to not be inspired by him. Even on my hardest days, he was there to uplift and remind me that we are all in the presence of God. Just look at what he did here at Casa!”

Consuela first met Padre Jose in the early 1980s when he was serving the Villa El Salvador community. Many years later, Consuela became ill and her future looked to be bedridden for the remainder of her life. She prayed to Father Joe and his Intercession, which led to her ability to overcome and pursue. She now runs and manages a soup kitchen at Iglesia San Jose, opened by Padre Jose—purchasing, preparing and serving food to more than 50 people each day as a volunteer.

“I feel so blessed each and every day to work. It is this mission that keeps me moving and alive. If I was not serving others, I would be wasting away in my bed. Instead, because I believe in Padre Jose’s strength, my family and the family of God has become so much larger with those who we provide meals every day.”

A student at the University of Wisconsin-La Crosse, Hannah had always felt a calling to serve. She took a leap of faith on her first flight, traveling to Casa Hogar as a long-term volunteer in the summer of 2018. Learning more about Father Joe changed her life. After teaching math in the United States for one school year, it brought her back to Casa again in 2019 and now has her placed for two years at Hosea’s Heart in Eswatini, Africa. Hosea’s Heart is a home for young women founded by Mary-Kate Martin, a UW-La Crosse graduate and Wisconsin native.

“God is working in our lives and guiding us even when we don’t see it. We all have a calling to serve as missionaries in one way or another. I never imagined that my mission journey would lead me down the path it has.”

Touched to the Tomb Prayer Cards and info