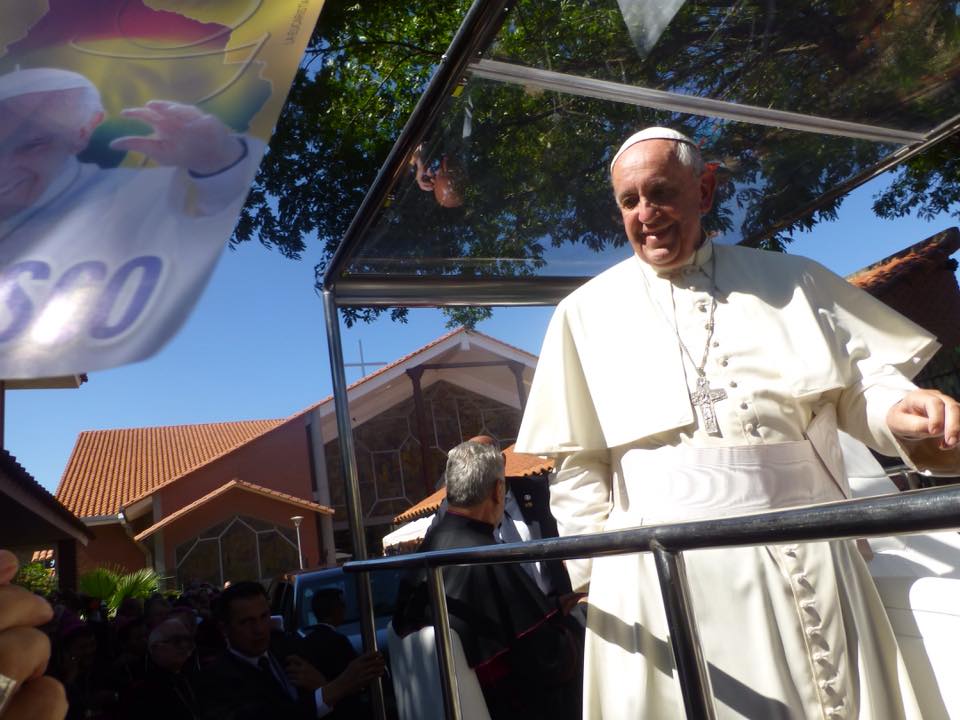 A very eventful time, indeed. I never would have expected Pope Francis to come to MY parish, but that is just what happened. Bishop Callahan gave me permission to work at our Mission Parish in Santa Cruz, Bolivia. It was founded 60 years ago by Father Joe Walijewski, and I spent the last two years working and ministering there. When we found out the pope was going to be coming, it was decided by the government and the diocese to have the Mass with the pope two blocks from the parish. We became the staging area for all the concelebrating priests, and visiting seminarians. We also were the distribution center for all the Consecrated Hosts that were to be offered during the Mass. If not for the work begun by Father Walijewski and the priest-missionaries that came after him, we wouldn’t have had the opportunity to host Pope Francis.

Our parish in Santa Cruz was the best place to have the Mass. The parish was on the outskirts of town, where it was started in 1956, but now lies very close to the busiest intersection in the city. The church, completed under Bishop Robert Flock, is among the largest in Santa Cruz. The parish center was well equipped. That is where the pope met with all the bishops of the country. The parish school provided a place to house seminarians and other visitors.

At the end of the meeting with Pope Francis and the bishops, I was fortunate enough to get the opportunity to shake hands with the pope. Initially, it seemed unlikely to happen as I was not given proper credentials to be in my own parish. The Swiss Guard, dressed like the Secret Service, forced me to leave the parish, out the north gate, twice. Each time, I went around through the east entrance, through the rectory, and back to the corner of the building. The second time, I kept back, closer to the exit, and they left me alone. As I was talking to the volunteers who hosted the bishops, the chief of police shouted and waved for the volunteers to come forward to shake the pope’s hand. Then, he waved me over with them, since he knew me. So, I quickly walked passed the Swiss Guard, whom had kicked me out twice, to meet the pope.

During this time, I was marveling at the experience of the volunteers. Some were crying, some were speechless, others more composed. I said something like, “Welcome, Holy Father, I’m a priest at this parish.” He just nodded his head and continued. He looked pretty tired. He went from our parish to the airport, and continued on his journey.

We’re all just standing on the shoulders of those who came before us. We started with Father Joe Walijewski, and concluded our time with Father Ed Penchi and me. Father Penchi served the parish for over 52 years, and passed away last January. “Padre Eduardo” was the only “lifer” there. All other missionaries came and went, but he stayed. His life is another testimony of Christ in the world. His funeral was very well attended and most people at the parish had never known the parish without Padre Eduardo. The thousands of people that he baptized or married, are too many to count. The parish does 300 to 400 weddings each year. It’s hard for us in Wisconsin to imagine that many weddings.

I’m very grateful for these opportunities to develop relationships in Santa Cruz, to meet Pope Francis, and to serve the people as they have changed me. I look forward to going back there in July to witness the marriage of a couple friends, and to visit the rest of the folks at the parish. Perhaps I can take a group with me and continue the relationship with the community, and help others learn more about Father Walijewski and his legacy.